Heading into the weekend, we’re reading and rereading this incredible poem by Tsitsi Ella Jaji – “To Bless the Memory of Tamir Rice.” It feels particularly poignant in the midst of the Derek Chauvin criminal trial.

Today we’re talking about a phrase that we hear tossed around a lot without much context: the school to prison pipeline. The “school to prison pipeline” is a name for the disproportionate number of students from low income backgrounds, particularly Black and brown students, that become incarcerated. Cultivated by the past 40-ish years of ramping up of school discipline policies, the school-to-prison pipeline has become sort of a “look how messed up the school system is” talking piece (often without the acknowledgment that it deserves). So what are the contributing factors?

Prior to the 1970s, punishing students by keeping them out of school was relatively rare: fewer than 4 percent of students were suspended in 1973. However, the 1970s and 1980s sparked new fears of violence inside and outside of schools and motivated states and districts to adopt policies that required students to be suspended for formerly benign behaviors.

In 1994, the Gun-Free Schools Act mandated a yearlong out-of-school suspension for any student caught bringing a weapon to school. At first glance, the Gun Free Schools Act seems like a good idea, no? We all want guns out of schools. Except one massive snafu: as is common with all criminal punishment system-adjacent policies, this act resulted in subjective enforcement that disproportionately harmed students of color. Schools began to interpret “weapon” very broadly, expelling students for making guns with their fingers or chewing a Pop-Tart into a gun shape or bringing a camping fork for Cub Scouts to class. As states began adopting these zero-tolerance policies, the number of suspensions and expulsions increased. The suspension rate for all students has nearly doubled since the 1970s, and has increased even more for Black and Hispanic students.

Schools weren’t the only places zero-tolerance policies were employed, however; around the same time that schools were “cracking down,” local police departments started leaning into their own broken windows policing (this type of policing emphasizes the importance of cracking down on small offenses in hopes of discouraging serious crimes and its effectiveness has been largely disproven). In schools, this broken windows theory was transmuted into more suspensions for previously benign offenses — talking back to teachers, skipping class, or being otherwise disruptive or disobedient.

During the rise of “zero tolerance policies”, administrators started relying more heavily on having police officers physically present in schools. These cops in schools took the form of School Resource Officers (SROs), whose primary job was to serve in law enforcement roles within schools with students as young as pre-K. Between 1997 and 2007, the number of SROs increased by nearly a third. Purportedly, cops have been placed in schools to prevent mass school shootings after Columbine — the intention being to to protect students, not to police them.

As is common with law enforcement, resources intended to be used for a rare occurrence inevitably get used for more common occurrences, and Black and Brown and low income people are punished and policed in the fallout. Per statistics from the Department of Education, 92,000 students were arrested in school during the 2011-2012 school year. And mostly for low-level violations: 74 percent of arrests in New York City public schools in 2012, according to a report published by the state courts, were for misdemeanors or civil violations.

School Resource Officers aren’t just “school cops” though and their involvement in the school system doesn’t just result in school suspensions; when SROs make an arrest, or more commonly, make a referral to juvenile courts or law enforcement, they are turning over that child to the juvenile justice system. Even if the punishment for a first offense is light, having a juvenile record makes a harsh punishment for a second offense much more likely.

Per a study by the Justice Policy Institute, there is a direct correlation between in-school arrests and the presence of SROs in schools. You know that saying “if the only tool you have is a hammer, every problem becomes a nail”? Feels applicable here. 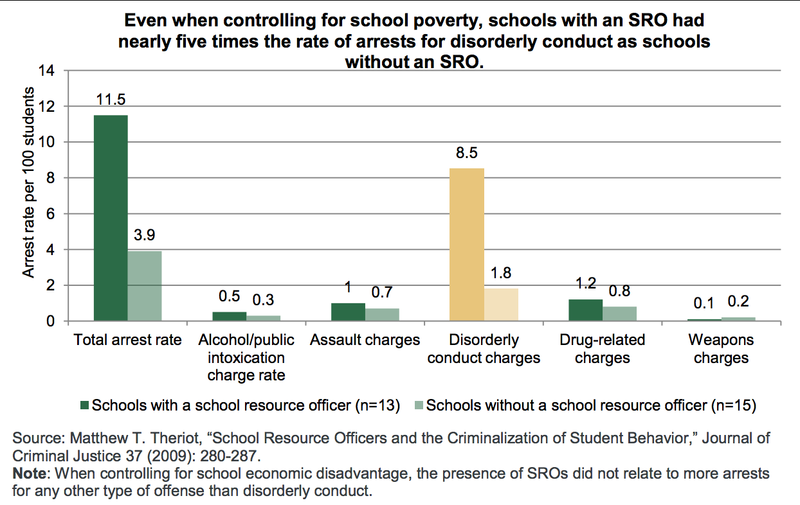 Causation is difficult to prove; it’s very possible that students more likely to misbehave would have ended up in academic trouble no matter what punishment they initially faced. Even still, the Texas study compared the data they collected to students with similar characteristics at similar schools who had not been suspended and found that students who had been suspended or expelled were twice as likely to drop out.

Students with earlier and harsher disciplinary experiences at school are also more likely to end up in the juvenile justice system, increasing later interaction with the criminal punishment system as well. Of students disciplined in middle or high school, 23 percent of them ended up in contact with a juvenile probation officer. Among those not disciplined, that figure stands at only 2 percent. A student who was suspended or expelled is “three times more likely to come into contact with the juvenile probation system the following year than one who wasn’t.”

Black students are suspended three times more frequently than white students. During the 2011-2012 school year, Black children made up 16 percent of all enrolled students but accounted for 31 percent of all in-school arrests.

Students with disabilities are suspended more frequently than students without disabilities, which usually also has racial implications. A 2014 study by a Columbia University researcher found that “five-year-old boys whose fathers had been incarcerated were substantially less behaviorally “ready” for school than five-year-olds whose fathers hadn’t been incarcerated – making them more likely to be placed in special-education classes for their behavioral disabilities.” (per Justice Policy Institute)

There are absolutely zero studies that have proven that Black students actually misbehave at higher rates, despite hundreds of studies looking at the relationship between race, behavioral trends, and suspensions. However, a 2002 studyfound that “white students were more likely to be disciplined for provable, documentable offenses — smoking, vandalism, and obscene language — while Black students were more likely to be disciplined for more subjective reasons, such as disrespect.”  Point being: the difference isn’t in the behavior itself, it’s in the perception of the behavior and subjective enforcement of rules around that behavior.

We’re just going to directly copy this paragraph from this Justice Policy Institute article because it bears reading in its original form: “A landmark study of Texas discipline policies found that 97 percent of school suspensions were the choice of school administrators. Only 3 percent of students had broken rules that made suspension a required punishment, such as carrying a weapon to school. And those discretionary suspensions fell particularly hard on Black students: they were 31 percent more likely to receive a discretionary suspension, even after controlling for 83 other variables.”

These discretionary suspensions usually relate to undefined standards such as “willful defiance” and “insubordination.” In fact, “insubordination” was the most common cause of suspension in New York City public schools in 2013-14.

Surprising to no one, these arbitrarily defined offenses are racially stratified too. In 2006-2007 (the last year data is readily available) in New York City, 51 percent of students suspended for “profanity” were Black, and 57 percent of students suspended for “insubordination.” Even arrests by SROs are often for vague reasons: in New York in 2012, one of every six arrests in schools was for “resisting arrest” or “obstructing governmental administration” after the student had been in a conflict with an officer.

Point being: cops in schools and zero tolerance policies were an overcorrection that inevitably had a disparate impact on Black students and students of color. On Tuesday, we’ll dig into more of the ways that initially well-meaning conversations about “public safety” often get warped to villainize low income community members, particularly Black community members.

Until then, we’re reading Michael Twitty’s The Cooking Gene (we’ve mentioned this before we think but wow is this book just *chef’s kiss,* literally) and about the life and legacy of DMX, including his long battle with the disease of addiction.
In Solidarity,
Ellie, Emily, and Hayden