Thank you so much to everyone who could make it to our first dialogue in a while on Sunday. We apologize for the technical difficulties that started us off but we were really thankful to see a few of your smiling faces on the other side of the call!

As we anxiously await the outcome of jury deliberations for the Derek Chauvin trial, we keep reflecting on one important thing: a conviction would theoretically provide accountability, but accountability is not justice. The police kill three people every single day in the United States. While there is independent value to securing convictions to bolster integrity in the rest of the system, we’re ultimately not working toward a world of more convictions of officers who kill, but of fewer killings. Justice, true justice, doesn’t look like increasing the charges for the 1.7% of officers who are charged with any crime following an “officer-involved’ killing, it means there are no killings. It means there are no abuses at the hands of officers which, honestly, means a world without police as we know them.

Today, we’re going to give a brief history lesson about the institution of policing in the United States (and a little bit about the rest of the world). Friday we’ll talk about the history of police in pop culture, and next week we’ll get a little deeper into police unions, qualified immunity, and the “warrior cop” mentality. We already know that many of you may be tempted to unsubscribe this week; we hope you end up reading through all the policing newsletters before you do.

THE HISTORY OF POLICING

Emily’s police law professor, Seth Stoughton (yes, that one), insists we start the conversation about the history of police with night watches. Night watches were first used in 800 CE China and made their way to the western world by 1200 CE. They very often did not have to do with crime prevention and instead would watch for fires in the pre-electricity era. These night watchmen eventually begot private policing companies with hired officers who would watch for property crimes and uphold basic security measures.

In the colonized land that would one day become the United States, records of night watches date back to the 1630s, wherein increasing urbanization gave rise to volunteer forces of men who would stand guard over night to ensure no trouble was afoot. Oftentimes, these men would drink on the job and usually had criminal records themselves.

The most similar structure to our modern police force arose as a means of preserving slavery: dating back to 1704, slave patrols were instated to “protect” the property interests of enslavers and— the American colonies’ most valuable  resource — labor.

The northeast colonies relied on the informal “night-watch” system of volunteer policing and on private security to protect commercial property. In the southern colonies, policing’s origins were rooted in the slave economy and the radically racialized social order that invented “whiteness” as the ultimate boundary. “Whites,” no matter how poor or low, could not be held in slavery. “Blacks” could be enslaved by anyone [including] whites, free blacks, and people of mixed race. The distinction—and the economic order that created it—was maintained by a legally sanctioned system of surveillance, intimidation, and brute force whose purpose was the control of Black [people]. Slave patrols, or paddyrollers, were the chief enforcers of this system; groups of armed, mounted whites who rode at night among the plantations and settlements of their assigned “beats”—the word originated with the patrols—seeking out runaway slaves, unsanctioned gatherings, weapons, contraband, and generally any sign of potential revolt. (from Ben Fountain) 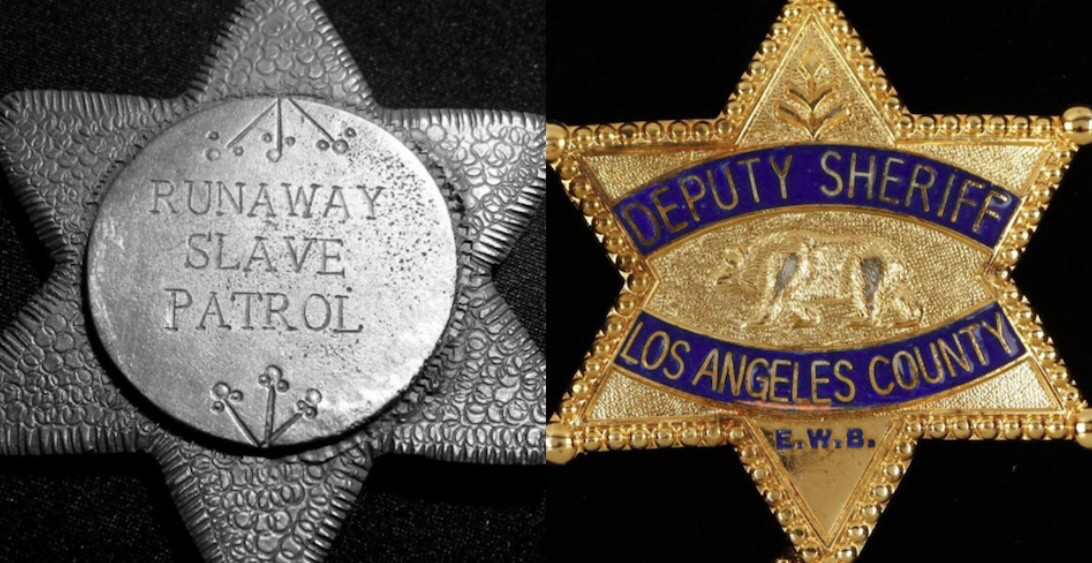 Slave patrols were usually made up of three to six white men on horseback equipped with guns, rope, and whips. In her book Slave Patrols: Law and Violence in Virginia and the Carolinas, Sally Hadden writes, “A mounted man presents an awesome figure, and the power and majesty of a group of men on horseback, at night, could terrify slaves into submission.” Among other duties, slave patrollers enforced the pass system, which required all enslaved people outside of the plantation on which they were forced to work, to carry a “ticket,” signed by the master indicating permission for travel. Enslaved persons encountered by patrollers without a pass would be beaten and detained on encounter, though possession of a valid pass was by no means a guarantee against beating.

In fact, there was virtually no guarantee against beatings for any reason and no accountability if a patrolman harmed or killed an enslaved person (except maybe to the enslaver/plantation owner, who had a vested economic interest in the capacity for physical labor of the enslaved person harmed). Patrolmen’s authority did not end outside the bounds of plantations; patrolmen were prohibited to enter plantation grounds and even slave quarters, where possession of books, writing paper, weapons, liquor, luxury items, or more than the usual store of food or other provisions would give rise to beatings. “Gatherings”—weddings, funerals, church services—were grounds for beating, writes Hadden. Any sort of social interaction with whites, especially poor whites, or any “loose, disorderly or suspected person” gave rise to a beating. The mere perception of backtalk gave rise to a beating. Singing certain hymns would result in a beating. Being well dressed gave rise to a beating. Even the most obedient behaviors could result in a beating: “Elige Davison, another former Virginia slave, remembered that as bondsmen lay asleep in their own quarters, patrollers would enter and lightly hit them with a whip to see if they were truly tired and asleep at the end of the workday,” Hadden writes. For an enslaved woman, beatings were of less concern than other harms inflicted upon her by patrolmen in her quarters.

Though the Civil War brought the end of enslavement, the offspring of the slave patrols were just getting started. Night-riding vigilantes — Ku Klux Klan, the Knights of White Camelia, the White League, and others—took the place of legally-sanctioned slave patrols. The traditional punishments of beating and whipping were supplemented with lynching and shooting as constraints on lethal force were lifted (in no small part because Black people’s economic value as a white man’s property was no longer). By the fall of 1865, most Southern states had passed their own series of Black Codes, which, according to historian Khalil Muhammed “criminalized every form of African American freedom and mobility, political power, economic power, except the one thing [they] didn’t criminalize was the right to work for a white man on a white man’s terms.”

The Black Codes required all Black people, whether free or enslaved before the Civil War, to sign annual labor contracts with white employers, lest they be deemed vagrants and fined or imprisoned. Though the Black Codes were technically repealed during Reconstruction, near identical laws targeting Black Americans almost immediately as Reconstruction came to a close, this time in the form of vagrancy laws. These laws once again criminalized unemployment for Black folks, and allowed for harsh punishments for even the most minor crimes, so long as they were committed by a Black person. It goes without saying that enforcement was biased, because officers, district attorneys, judges, and correctional staff were inundated with white supremacist values.

“White supremacy continued as the dominant reality for the next hundred years, a social and psychological reality maintained by terror, surveillance, and the letter of the law. Its power was such that even the New Deal—the most profound reordering of American society since the Civil War—left white supremacy intact. Twenty-six lynchings were recorded in Southern states in 1933. An antilynching bill was defeated in Congress in 1935. Southern Black [people’s] awareness of antebellum history was acute, naturally enough given that they were living it.” (from Ben Fountain)

Modern American policing more or less began in 1909, when August Vollmer became the chief of the police department in Berkeley, CA. Vollmer is credited with the first stages of the police’s militarization. He’d served with the Eighth Army Corps in the Philippines in 1898 and claimed to “study military tactics and use them to good effect in rounding up crooks… After all we’re conducting a war, a war against the enemies of society.” The enemies? “Mobsters, bootleggers, socialist agitators, strikers, union organizers, immigrants, and, especially, Black people.”

To domestic policing, Vollmer and his ilk refashioned the kinds of tactics and weapons earlier deployed against Native Americans in the West and against colonized peoples in other parts of the world, including Cuba, Puerto Rico, and the Philippines. Vollmer was the first to institute a training model wherein police departments, staffed by other veterans of the United States wars of conquest and occupation, would teach officers to hold the ultimate position of authority. A “police captain or lieutenant should occupy exactly the same position in the public mind as that of a captain or lieutenant in the United States army,” Detroit’s commissioner of police said. Per this article by Jill Lepore, “today’s police officers are disproportionately veterans of U.S. wars in Iraq and Afghanistan, many suffering from post-traumatic stress. The Marshall Project, analyzing data from the Albuquerque police, found that officers who are veterans are more likely than their non-veteran counterparts to be involved in fatal shootings. In general, they are more likely to use force, and more likely to fire their guns.” Volmer era policing wasn’t just characterized by its authoritarian posturing of officers, but by its enforcement of Jim Crow laws.

Black folks were not the only group targeted by police in the early 1900s. The U.S. Border Patrol was formed at the Mexico-United States line in 1924, the year that Congress restricted immigration from southern Europe. At the insistence of Southern and Western agriculturalists, Congress exempted Mexicans from its new immigration quotas in order to allow low-wage migrant workers to enter the United States, serving as a growing working class alongside sharecroppers across the states. Though Border Patrol began as a relatively small outfit, by the 1940s it had grown to a national quasi-military, focused on policing the southern border in “campaigns of mass arrest and forced deportation of Mexican immigrants, aided by local police.”

This newsletter is getting pretty long so we’ll delve more into recent history (and particularly, how the media has influenced recent history by shaping public perception of policing) on Friday. Before we go, we want to take this moment and point something out that may seem kind of obvious: through all of these laws (the Black Codes, vagrancy laws, Jim Crow, etc.) and through laws we understand to have racist undertones today (the War on Drugs, loitering prohibitions, mass evictions relating to gentrification, etc.), the police are active participants in the racism being enforced. Though, to an extent, officers are just doing their jobs, if someone’s job is directly connected to, say, targeting a specific neighborhood and making low level arrests that they would not make in a wealthier area, their job is in the enforcement of bigoted practices. Someone can just be doing their job and still be doing harm. Someone can just be following orders and still be wielding generations of white supremacist violence.

In solidarity,
Ellie, Emily, and Hayden